No More Talking (Hearts Are Wild #1) by Rhian Cahill 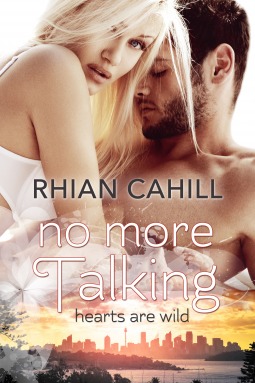 I have a real love-hate relationship with these kinds of storylines; the guy falls in love with his best friend's sister, but doesn't want to pursue a relationship because of his friendship.

Frederica "Freddie" Mann has had a thing for her brother's best-friend Zachary "Zac" Moreland, only problem is that like all books following this type of story, he plays hot and cold.

Zac has had a thing for Freddie for a while and on one particular day a little something happens; since then he has taken to avoiding Freddie and referring to her as "Red".

The story begins at Freddie's brother's wedding and from there, after a little giving in the story kicks off. I won't tell you more because then I'd be giving the story away and it wasn't that long.

The characters were okay, Zac I hated / liked; he has his moments, but overall the reason I hated him was that one day he was very I'm into you and the next he's all this is wrong, I need to pull back. Like seriously, get your head out of your ass and either make a move or step back. As for Freddie, really, don't make it so easy for him. Teach him a lesson or two.

Overall, the story was amusing; Ms. Cahill has an entertaining writing style. I hope the next book is a bit longer so that maybe we can connect with the characters better.