Love and Mistletoe by Zara Keane 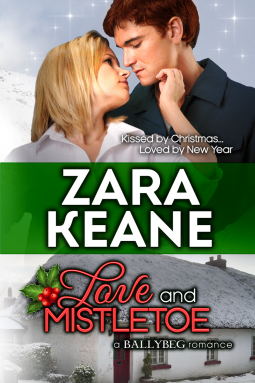 Sharon MacCarthy has a tiny, okay maybe a somewhat big crush on Brian Glenn; only one problem he's a Garda, which is Irish for police officer. As the towns resident bad girl, whose been arrested a time or two by the cute Garda, she thinks she doesn't stand a chance; her only hope is to move out of her vile father's, finish her degree, and move out of her small town.

Garda Brian Glenn wants a promotion; he wants to move up the ranks and the only way to do that is to get a degree, so that's exactly what he does. Being so close to finishing, he doesn't need the distraction that is his favorite bad girl.

When they end up in the same class and to add fuel to their fire, they have to work on a project very closely together, they start to see each other in a different light, without the labels of Garda and Bad Girl.

The story was a fun light-hearted read with entertaining characters. I especially loved the epilogue, where we get to see what became of them down the line. Despite being named "Love and Mistletoe" the whole story begins before the holidays, so it's not centered around Christmas. I was really glad I read this book and can't wait to read other books written by Ms. Keane.