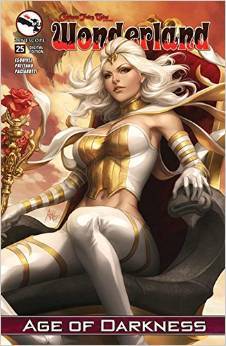 Well as the Dark Queen's darkness spreads, Wonderland is going to hell and Calie must make a final stance.

The Void, who looks like James Franco except he/it is still a major prick.

We get a new player, in one of the Void's crazy games, Hazel who quickly joins forces with Calie.

Of course, Violet is always on her mom's side and in a leading to the "end", the Queen of Diamonds and the Queen of Clubs also join to finally bring an end to the evil Queen of Spades.

The art as always great, love that women are the leads and they don't need a male sidekick, however, this one lost points with me because the final fight was not climactic enough.

Although, I will say that in the end, everyone gets a somewhat happy ending, especially Diamond and Clubs. Plus, don't fret we will see more of Wonderland in Age of Darkness.