The Squidder by Ben Templesmith 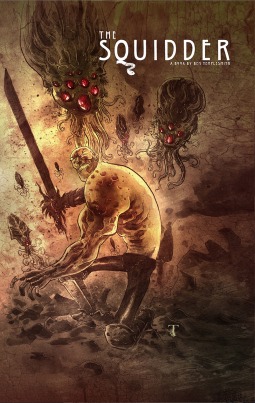 There was something that was missing to really bring this post-apocalyptic to completion. The story follows a bio-engineered super soldier, the last of his kind, as he wanders what is left of a parasite invaded earth.

In his journeys he rescues a cult member to the invading overlord and eventually finds a way to close of the invasion. In the end he repels the invader and becomes a cloned version of himself, basically, cliff hanger ending, where we see him die and then we see clones.

Maybe the reason the  story didn't work for me is that we don't see much of the initial arrival, references are only of post-invasion and losing the resistance. It was a descent story and maybe if there's a sequels that fills in my many unanswered questions, I can get fully behind this story.