Minimum Wage Volume 1: Focus on the Strange by Bob Fingerman 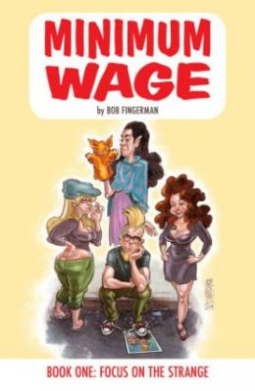 I'm gonna start you off with a warning, this book is for mature audiences only.

Okay, warning time over, this book written by Bob Fingerman (not sure if that's his real name, because if it is that is hilarious, considering the content of the book) and follows Rob Hoffman and the pitifullness of his life as a recent divorcee.

His friends are crazy, his rebound love life is depressing, but makes for great fodder and his job as pornagropher, I mean cartoonist just makes it funnier.

Rob is a hilarious character that over analyzes everything, is way too stuck up in his own head and is still very hung up on his ex.

The way his friends rib him is also funny,  my favorite quote from one of these scenes was "AND I SHOULDN'T MURDER YOU WHY?", which after you read you will vote it your favorite quote in the conversation.

Anyway, if you buy one comic this week make it this one, the graphics are all drawn in bluish tin and only occasionally are there any scenes in color. Just one more thing, Fingerman, seriously, Fingerman, after the puppet scene that is just so hilariously wrong, right, I don't know but still Fingerman. Still laughing.