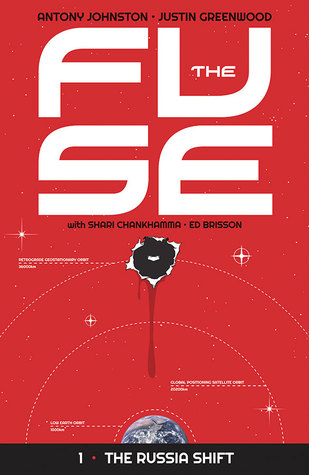 This new series follows Earth detective Ralph Dietrich and his arrival on the FUSE (what we learn is the name of an energy space station orbiting the Earth). On his first day up in space he unknowingly insults his superior and partner Klem Ristovych who loves to shout "I call bullshit".

Klem was by far my favorite character, she was what they called an FGU (first guys up); they make a lot of references in the book that they take forever to explain.

The story takes place around a conspiracy involving cablers, which is the FUSE's version of homeless people and then ends with a bit of a set up that lets you know more conspiracies are on the way. Ralph was a decent character, a little slow on the uptake, but it's expected as it's like going to a new country when you go from Earth to the FUSE, however Klem, I cannot stress enough how badass she is, she's like at retirement age but she still kicks ass. The storyline in this volume was not all that impressive but I feel that the introduction and set up for subsequent issues makes it a series worth checking out.