The Field by Simon Roy 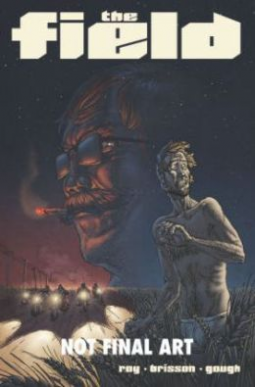 The novel starts won't a man in a wheat field (in horror movies, he'd be about to die) in nothing but his white undies (seriously, at his age he doesn't have any boxers) getting chased by a madman in a car. We later learn this madman is named Christian and he is not really trying to kill him more like protect him.

It turns out some failed time travel experiment (yeah, those always work out) this man, who we later learned was/is a scientist named Grant is the "Source", as long as he's alive the same day will keep repeating itself (because everyone wants to relive someshitty day) over and over again.

For the most part some people have figured it out and they take this as a do whatever the F$#* you want type of situation, of course there is always some unknown corporate entity wanting to exploit this, I'm pretty sure we'll learn more about them in the future, that is if tomorrow ever comes (see that there, little time joke, feel free to laugh).

The story was descent, it's starts off with a descent premise with lots of potential. It's a little gritty in dialogue and art, so it won't be to everyone's taste, but then again, nothing ever is.