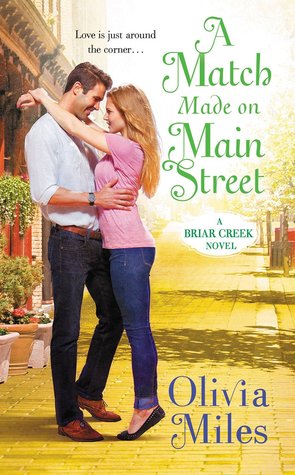 About A MATCH MADE ON MAIN STREET:
Anna Madison has faithfully avoided her old flame for six years, even though their Main Street restaurants are only a few blocks apart. The sting of his rejection was enough to make her swear off dating for good, but when her successful restaurant is damaged in a fire, she's left to the mercy of the one man she's spent years proving she doesn't need...and convincing herself she doesn't want. Mark Hastings can't say he's happy being alone, but at least his heart is safe. Burnt out from running the Briar Creek diner, he's ready for a change. He tells himself he's just being neighborly by letting Anna use his kitchen, but being by her side again stirs up temptations he might not be able to resist a second time around.

About Olivia Miles:
Having grown up in New England, Olivia Miles attended McGill University in Montreal, Quebec before settling in Chicago where she lives with her husband, their daughter, and two ridiculously pampered pups. When she is not chasing after her little ones, she is hard at work creating feisty heroines and alpha heroes with a heart. A city girl with a fondness for small town charm, Olivia enjoys highlighting both ways of life in her stories.

Me thinks it's love....
This was a funny second chance romance-comedy in the kitchen; when Anna Madison's restaurant burns down, she has no choice but to eventually work at ex's, Mark Hastings' diner (ouch).

Anna's arrival makes Mark wish for a second-chance; of course there is some meddling, because what kind of second chance romance doesn't have a meddler.

Both Anna and Mark are nice enjoyable characters and it was really sweet seeing them come together.